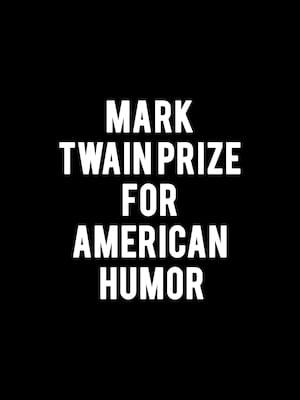 Past recipients of the prize include Julia Louis-Dreyfus, David Letterman, Bill Murray and Eddie Murphy

American literary icon and humorist Mark Twain's wise words and heartfelt humour has travelled over the decades, still inspiring and eliciting chuckles over a hundred years after his passing. It makes the prize given in his honor all the more auspicious - awarded to people who have impacted American society in a similar way, The Mark Twain Prize has celebrated extraordinary talent for two decades. Don't miss the moment its awarded to iconic funnyman Dave Chapelle at the Kennedy Center this fall.

A true legend of the American stand-up scene, as well as an outspoken African American voice in the entertainment industry, Chapelle leaves no stone unturned in his popular, no-holds-barred brand of comedy. His exploration of politics, race, sex, gender, pop culture and the pitfalls of fame, combined with an electric wit and sharp irreverence, have made him one of the country's foremost comedic forces to be reckoned with. Special guests Bradley Cooper, Tiffany Haddish, Kevin Hart, Trevor Noah, John Stewart, John Legend and Chrissy Teigen come together to honor Chapelle during the one-night-only award ceremony.

Sound good to you? Share this page on social media and let your friends know about Mark Twain Prize for American Humor at Kennedy Center Concert Hall.