Sorry! You missed A Thousand Splendid Suns at Kreeger Theatre 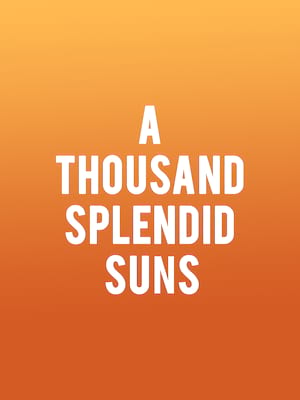 Why See A Thousand Splendid Suns?

Based on the best-selling novel by Afghan-American author Khaled Hossieni, A Thousand Splendid Suns is a deeply moving portrait of resilience in the hope of seemingly impossible odds. Don't miss the profoundly beautiful story of hope and survival during Arena Stage's ground breaking 2019/20 season, curated by the company's artistic director Molly Smith.

The family-based epic into the lives of three generations of Afghan women, thrown together by the bonds of marriage, family, and a secret past, all the while negotiating the danger of modern-day war-torn Kabul. We are introduced to the self-reliant Laila, who after finding herself unmarried and pregnant, is ordered by the religious police to marry her much-older neighbour following the destruction of her family and home.

Trapped In her new home, she finds herself an unlikely ally in Mariam, the neighbour's first wife. Relying on each other's kindness and resourcefulness, they overcome the odds of their positions to raise a family together, bringing new hope for a new, enlightened generation.

Seen A Thousand Splendid Suns? Loved it? Hated it?

Sound good to you? Share this page on social media and let your friends know about A Thousand Splendid Suns at Kreeger Theatre.