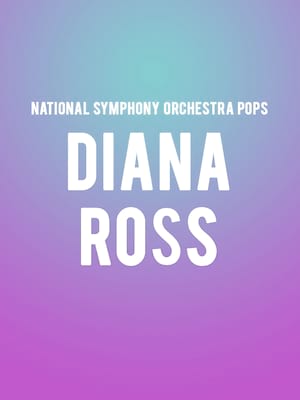 One of the most successful and influential recording artists in the world, don't miss your chance to see Miss Diana Ross live in concert alongside the National Symphony Pops Orchestra this January, showcasing some the biggest and best hits from her incredible 50-year career.

The list of Ross' achievements is staggering. She's won a dozen Grammys, sold over 100 million records worldwide and was Oscar-nominated for her portrayal of Billie Holiday in The Lady Sings the Blues. In 1976 Billboard named her the greatest female entertainer of the century, and there was a lot more to come from Ross after that. What really matters is that Ross remains an enthralling stage presence, a singer of such poise and remarkable vocal gifts that she's able to hold an audience in the palm of her hand from the moment she steps out into the spotlight right up until she leaves the stage.