Sorry! You missed The Try Guys at Warner Theater 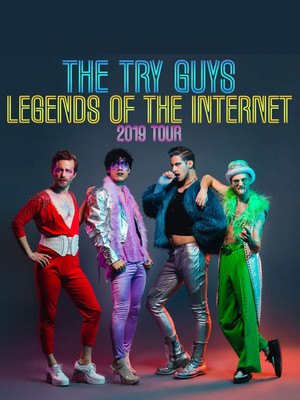 Legends of the Internet: a thrilling evening of comedy, spectacle, and friendship.

Why See The Try Guys?

The 2019 Legends Of The Internet Tour

Forming their bonds of utterly viewable brotherhood whilst all working at internet media, news and entertainment company Buzzfeed, Kieth, Ned, Zach and Eugene started the Try Guys online comedy series in 2014 with the everpopular 'Guys Try Ladies' Underwear for the First Time' video, thereafter going viral with each of their subsequent releases. From simulated labour pain to dressing up in drag to making an apple pie without a recipe, you name it, The Try Guys have tried it!

In 2018 the Try Guys announced they were branching out on their own and left Buzzfeed to develop their brand independently. Having amassed hundreds of millions of views, they ready to burst from the screen and onto the stage during their first ever live tour! During the hotly anticipated Legends of the Internet Tour, the courageous quartet are set to bring unedited and unfiltered live content during a unique and interactive show. There'll be laughs, stunts, gross out moments and a chance to finally meet the Try Guys in person!

They were amazing, everything I thought they would be and more. As good... more

Sound good to you? Share this page on social media and let your friends know about The Try Guys at Warner Theater.