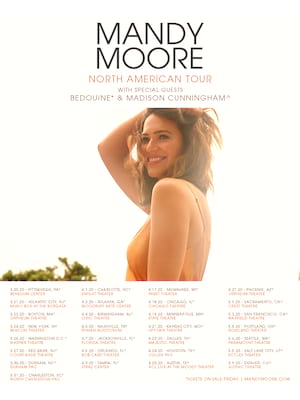 Her new single, "When I Wasn't Watching," not only reintroduces her appealing voice and previews a forthcoming album (its release date and title haven't been announced). It also seems to address her hiatus-in poignant, widely relatable fashion.

For the first time in a decade, America's sweetheart Mandy Moore is hitting the North American road on tour. From pop star to screen icon, the multi-talented performer has enjoyed a long and illustrious career in the entertainment industry beginning with the breakthrough success of her first single Candy in 1999. In 2009, following the release of her sixth studio album, she took a break to pursue her acting career which blossomed thanks to roles in Tangled, The Darkest Minds and smash hit TV series This Is Us.

Curating a setlist of old and new tunes, Moore is set to put on an intimate series of shows that celebrate the many facets of her extraordinary life and legacy. Backed by a superb group of musicians, who've featured on her most recent releases, she wants audiences to feel like they've been invited into a living room to experience her songs in their purest form. Her latest singles - When I Wasn't Watching and I'd Rather Lose - were released earlier in 2019 and herald a new folk sound for the songstress.

Sound good to you? Share this page on social media and let your friends know about Mandy Moore at Warner Theater.