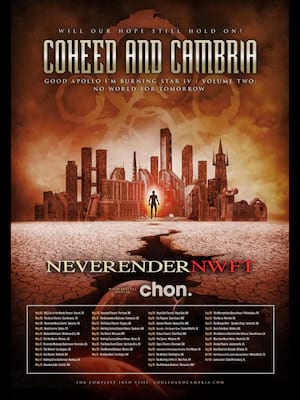 ...the band proves that they are one of the most energetic and overall entertaining performers in the industry at this time, investing in their stage set up to help deliver a memorable experience for all in attendance.

Why See Coheed and Cambria?

Alternative rock wizards Coheed and Cambria are back and celebrating their musical milestones on the highly-anticipated Nevernder NWFT North American Tour this spring and summer. The veteran rockers are set to perform their 2007 breakthrough album Good Apollo, I'm Burning Star IV: Volume II: No World For Tomorrow in its entirety, alongside other familiar favorites of the C&C catalog.

Seen Coheed and Cambria? Loved it? Hated it?

Sound good to you? Share this page on social media and let your friends know about Coheed and Cambria at The Anthem.