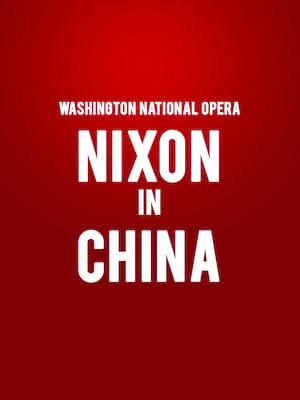 Created by American composer John Adams, Nixon in China was Adams' first opera and took inspiration from U.S. President Richard Nixon's visit to China in 1972. As the first time a U.S president had been to the People's Republic of China, the event became a landmark occasion. Now, the Washington National Opera perform the operatic work which tells the story of "the week that changed the world."

What is Nixon in China about?

It's 1972 and President Richard Nixon is hot on the campaign trail. Along with his wife Pat, and ever-present advisor Henry Kissinger, he decides to make a very special visit to China and it's president Mao Tse-Tsung, where the westerners are moved to question more than just political integrity in the face of an incredibly different culture...

In English with projected English titles

Sound good to you? Share this page on social media and let your friends know about Washington National Opera - Nixon in China at Kennedy Center Opera House.