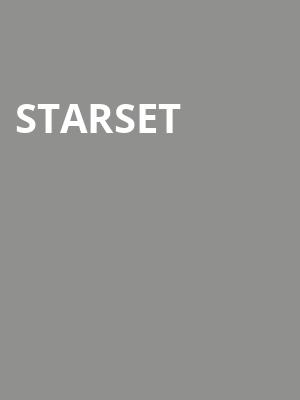 Vocalist and creator Dustin Bates is hugely charismatic and alluring as the central character, surrounded by his crew of Beautiful People wielding guitars, straddling cello and smashing drums. It's an immersive rock experience

Purveyors of crunching, arena-filling rock anthems, Starset was formed in 2013 by ambitious frontman Dustin Bates, formerly the lead singer of Downplay. Comprised of an ever-evolving collective of musicians, the outfit fuse cinematic rock with a sense of the theatrical - the band operates under a self-constructed mythos in which they are recruits of the secret Starset Society and are tasked with spreading the awareness of sonic transmissions from the constellation Ophiuchus.

Starset continues its sonic sci-fi narrative during their 2021 Divisions Tour. The coast-to-coast North American trek is timed to coincide with the release of the group's latest album Divisions, the hotly anticipated follow-up to debut and sophomore offerings Transmissions and Vessels. Exploring the impact of science and technology on our lives, the post-apocalyptic album is filled with soaring orchestral moments, mega hooks, and lush cinematic orchestrations.

Seen Starset? Loved it? Hated it?

Sound good to you? Share this page on social media and let your friends know about Starset at The Fillmore Silver Spring.