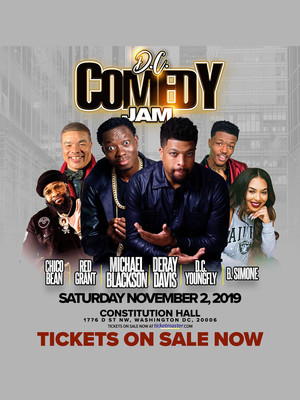 The biggest names in African American comedy join forces for one special night only.

The DC Comedy Jam is back for another year of belly laughs and this year's line-up means business. For one special night only, Ghanaian actor and comedian Michael Blackson, Chicago comic DeRay Davis, Washington's very own prolific stand up Red Grant, popular Youtube and Vine roaster DC Young Fly, Wild 'N Out favorite Chico Bean and up and coming performer B Simone pull no punches in their quest to get the audience rolling in the aisles.

Topping the bill, Michael Blackson AKA the "African King Of Comedy" is often hailed as one of the most original comedians in the game and regularly steals the show with his insightful often zany brand of humour. Born in Ghana, but raised in Philly where he honed his comedy chops, he often delves into his African heritage and a unique, off-the wall perspective of America with riotous results.

Sound good to you? Share this page on social media and let your friends know about DC Comedy Jam at DAR Constitution Hall.