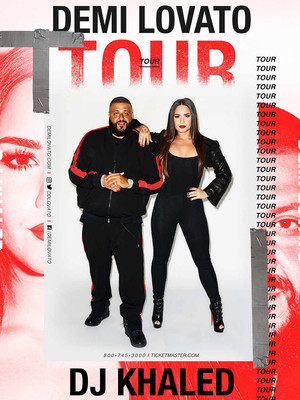 DJ Khaled will support pop powerhouse Demi Lovato as she takes to the road on a massive 2018 tour! The 'Sorry Not Sorry' singer has gone from strength to strength, with 2017 seeing her release one hit after another including . Lovatics, brace yourselves!

After being introduced to the world in The Jonas Brothers movie Camp Rock, Demi Lovato became one of Disney Channel's biggest stars. She's released a ton of million-selling records, appeared as a judge on The X-Factor, and was chosen to sing the promotional version of Let it Go from Frozen. 2015 saw her release her acclaimed album Confident, which featured the singles Cool for Summer and the title track.

Yvette: “More than we expected”

Concert was off the hook as DJ KHALED had special guest such Chris Brown,... more

Sound good to you? Share this page on social media and let your friends know about Demi Lovato and DJ Khaled at Verizon Center.