Sorry! You missed Korn and Faith No More at Jiffy Lube Live 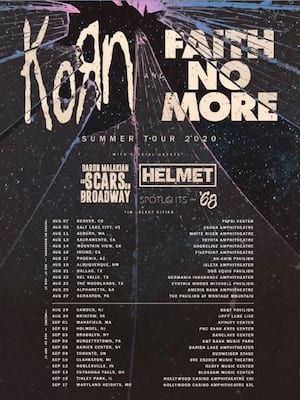 Korn and Faith No More

Get ready for Korn and Faith No More

Why See Korn and Faith No More?

These two giants of alt-metal are fusing together this summer for an epic summer tour, bringing the noise on an extensive number of dates for your aural pleasure. Support will come in the form of Daron Malakian, Scars on Broadway and Spotlights (8/7 - 8/27) and Helmet and '68 (8/29 - 9/17). So prepare for one awesome concert when these titans go head to head!

One of the first bands of their type to break into the mainstream, taking over radio play with their bold fusing of genres, Grammy award winners. Korn are well known for underpinning their explosive guitar riffs with a hip-hop edge. Having released their 13th album, "The Nothing", in September Korn will be presenting some of their brand new tracks, alongside fan favorites.

Formed in 1981, Faith No More are the ultimate behemoth in the '80s and '90s hard rock scene. With an extensive back catalog that includes flavors of jazz, soul, hip-hop, funk and of course, heavy metal, they were instrumental in inspiring a generation of musicians, including paving the way for Nirvana. This jaunt marks their first live shows in the US since 2006!

Seen Korn and Faith No More? Loved it? Hated it?

Sound good to you? Share this page on social media and let your friends know about Korn and Faith No More at Jiffy Lube Live.