Sorry! You missed Aerosmith at The Theater at MGM National Harbor 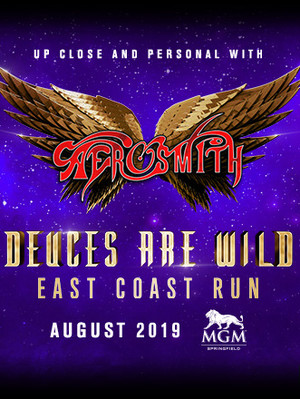 The Deuces are Wlid Tour marches this summer

The Deuces are Wild Tour

The "Bad Boys of Boston" are back with a brand-new 'Deuces are Wild' tour for 2019, and boy, are we excited! Popularly known as the band who made "the single most successful comeback in the history of heavy metal, if not all of popular music", the band have seen a huge revival since the early Noughties, and in 2013, frontman Steve Tyler and guitarist Joe Perry were inducted into the Songwriters Hall of Fame. This tour will see the band play at a mixture of big venues and smaller ones in this East Coast run.

Hyped as 'America's Greatest Rock and Roll Band', Aerosmith started off as two separate bands becoming one. In 1964 Steven Tyler formed the band Chain Reaction, and Perry and Hamilton formed the Jam Band. In 1970 both bands were present at the same gig, and Steven Tyler fell in love with Jam Band's sound, and decided he wanted to combine the two bands. Later that year, the bands met back up and Aerosmith was formed.

Seen Aerosmith? Loved it? Hated it?

Sound good to you? Share this page on social media and let your friends know about Aerosmith at The Theater at MGM National Harbor.