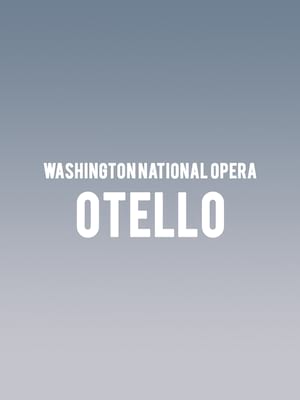 Two of the most celebrated figures of their respective creative worlds, Guiseppe Verdi and William Shakespeare are a match made in operatic heaven. Don't miss the hotly anticipated return of Washington National Opera's Otello, which last graced the Kennedy Center twenty years ago and was received with much critical acclaim upon its debut.

Helmed by Verdi champion, the Italian conductor Daniele Callegari, and prolific director David Alden, the production launches into a dramatic whirlwind of love, heroism, jealousy, despair and nefarious intent from the very opening chord and opening storm scene. Amidst the turbulence that rages without and within, a good-and-evil-tale-for-the-ages emerges, bolstered by arias like Desdemona's Ave Maria and Iago's I Believe in a Cruel God.

Sound good to you? Share this page on social media and let your friends know about Washington National Opera - Otello at Kennedy Center Opera House.