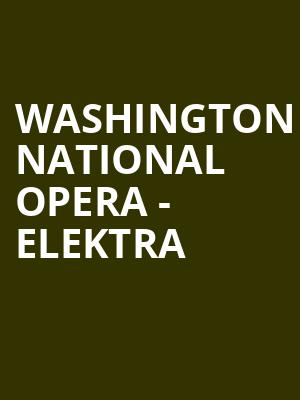 Photo by Antonia Felipe on Unsplash

It's a story that would seem excessive for even the most lurid of "real life" dramas, or blood-soaked slasher movies. But it's always been right at home in the opera house - Richard Strauss' intense, one-act opera, Elektra.

Dynamic performer Christine Goerke steps into the role of the bloody-minded heroine in this brand new Washington National Opera production of Richard Strauss's rollercoaster masterpiece of psychological terror. Set in the early days after the Trojan War, sex and vengeance are the order of the day, when a young princess sets out to make her treacherous mother pay for the murder of her father. Directed by Francesa Zambello, Ancient Greece is brought to life by vibrant sets from Erhard Rom and striking costumes from Bibhu Mohapatra.

What is the story?

Hell hath no fury as a woman scorned, and in this case, the epithet perfectly suits Elektra, daughter of King Agamemnon and Queen Clytemnestra. A tale of blood begetting blood, this harrowing opera is foreshadowed by the return of the King from war after turning the tide in his favor by sacrificing his youngest daughter Iphigenia. Out for vengeance, Clytemnestra butchers her husband with the help of her lover, and this, in turn, does not sit well with Elektra, who vows to make her mother pay, continuing the rapidly descending spiral of the house of Aeschylus.

Sound good to you? Share this page on social media and let your friends know about Washington National Opera - Elektra at Kennedy Center Opera House.