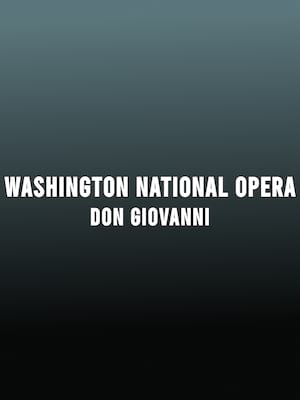 Washington National Opera brings one of Mozart's most famous operas to the city in February-March 2020, as Don Giovanni hits the stage at the Kennedy Center Opera House. Performed in Italian with Projected English subtitles, the opera follows the notorious lover Don Giovanni as he meets his fate when the women of his past unite against him.

Premiered in 1787 in Prague, Mozart's two-part work is based on the legend of the infamous libertine Don Juan. Fierce and powerful as a piece of classical music and theatre, this adaptation features Ryan McKinny as Don Giovanni and the orchestra is conducted by Evan Rogister, the principal conductor for Washington National Opera and the Kennedy Center Opera House Orchestra.

Sound good to you? Share this page on social media and let your friends know about Washington National Opera - Don Giovanni at Kennedy Center Opera House.