Sorry, it looks like Washington National Opera - Boris Godunov is no longer happening on these dates 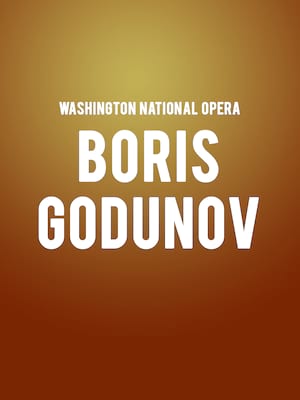 This towering tale of deception, guilt, and revolution surges with dark orchestral themes and the eye-popping pageantry of over 100 cast members.

Composed between 1868 and 1873, Boris Godunov is widely considered to be one of Modest Mussorgsky's most stellar pieces of work. Delve into Russian 16th-century politics with Mussorgsky's only complete opera conducted by Evan Rogister and directed by Francesca Zambello. Washington National Opera presents its rendition of this royal tale.

What is Boris Godunov about?

Based on Alexander Pushkin's epic play and true events, the titular Boris refers to 16th Century Tsar Boris Godunov, whose short yet chaotic reign fell between the end of one great Dynasty and the start of Russia's last, that of the famed Romanov's. Reigning between 1598 and 1605, in the opera, Godunov's rise to the throne is complicated by the fact that the real heir has been murdered.

Sound good to you? Share this page on social media and let your friends know about Washington National Opera - Boris Godunov at Kennedy Center Opera House.