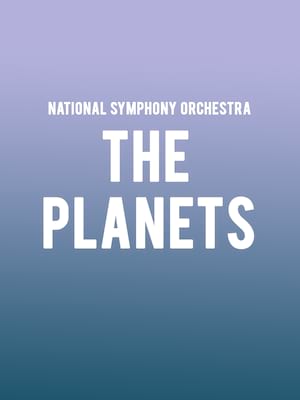 An epic night under the stars

Rocket into the cosmos as the National Symphony Orchestra takes on Holst's perennial audience favorite, under the baton of Gemma New, making her NSO debut. A glorious and transcendental masterpiece, explore the joy of Jupiter, the serenity of Saturn and the marching of Mars in this out-of-this-world evening. Also featuring the one and only Yefim Bronfman lending his talents to Beethoven's Fourth Piano Concerto.

Completed between 1914 and 1916, The Planets is by far the most popular of Holst's works (a fact that troubled him in later life). Based not around the Roman Gods as is easily assumed, each planet's character and sound comes from Astrology, an idea that fascinated Holst at the time. Each movement seeks to evoke the emotion and passion that each planet elicits in us.

Photo by Jeremy Thomas on Unsplash

Sound good to you? Share this page on social media and let your friends know about National Symphony Orchestra - The Planets at Kennedy Center Concert Hall.