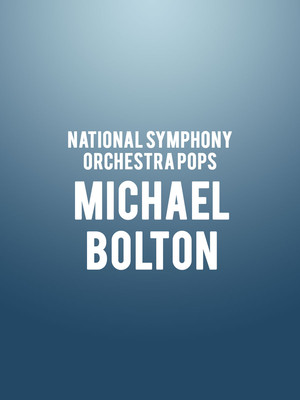 The golden shoulder-length curls are long gone but from the first bar of Stand By Me on this night, it was clear Michael Bolton's voice abides.

Swoon! Perennial flaxen-haired heartthrob Michael Bolton is joining special guest conductor Stuart Chafetz (renowned Principal Pops Conductor of the Columbus Symphony) and the National Symphony Orchestra Pops for one special evening where he'll trace back over the years and perform career-defining classics like 'When A Man Loves A Woman,' 'Missing You Now' and 'How Am I Supposed To Live Without You', as well as put his own spin on pop, rock, soul and even classical standards.

Originally recording under his birth name Michael Bolotin, the blue-eyed balladeer sang and recorded soul covers in the 70s before becoming the lead singer of heavy metal outfit Black Jack. When they split up in the early 80s, the crooner shuffled a few letters around and changed his name to Bolton in lieu of a brand new solo career that launched with the release of his self-titled album in 1983. Thirty six years, 75 million in record sales, eight top ten albums, two Grammy Awards and a haircut later, Bolton is still going strong, continuing to release, record and elicit mass hysteria with his romantic charm wherever he roams.