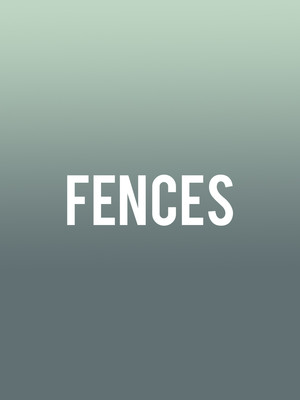 Often perceived as a black dramatist's rejoinder to Arthur Miller's Death of a Salesman, this tale of a struggling family in 1950s Pittsburgh continues to be held up as one of the great African-American plays

Two-time Pulitzer Prize winning literary icon August Wilson chronicled the 20th century African-American experience through a series of plays and landmark works that were not only politically and socially engaged, but part of the fabric of black history itself. Wilson's first piece to win a Pulitzer for Drama, as well as the 1987 Tony for Best Play, was Fences, an insightful portrait of manhood and prestige buoyed by the writer's lyrical language and eye for dramaturgy.

Helmed by foremost Wilson interpreter Timothy Douglas, the celebrated drama finds its way to the stage once more during the 2019/20 Ford's Theatre season. Set in mid-century Pittsburgh, the story follows Troy Maxson, who was once a Negro League baseball star with a bright future ahead. But his aspirations remained as such, and scraping by as a sanitation worker later on in his life, he attempts to assert control over his wife and son, whilst the perils of a racist society close in.

Seen Fences? Loved it? Hated it?

Sound good to you? Share this page on social media and let your friends know about Fences at Fords Theater.