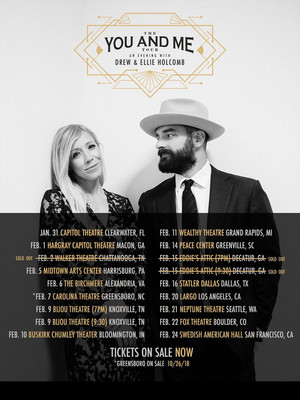 An Evening with Drew and Ellie Holcomb is a special engagement event, allowing The Holcombs to collaborate once again.

Why See Drew and Ellie Holcomb?

The Holcombs Reunite Once More

Powerhouse husband and wife duo Drew and Ellie Holcomb are thrilled to be hitting the road together once more on the 2019 You And Me Tour. Both Drew and Ellie began their musical journey as part of still living outfit Drew Holcomb and the Neighbours in 2006, fusing southern rock and indie pop under the banner of alt country. In 2011, Ellie left the band to pursue solo ambitions as a Christian music singer whose experiments with praise, folk and pop garnered top of the charts success.

Following the acclaim of their acoustic tour in early 2018, the dynamic duo return to the stage with a mix of newer, individual works as well as songs they performed together when Ellie was part of the Neighbours. Spending most of the time together on stage, Ellie and Drew are sure to get spines tingling with renditions of classic Holcomb songs like Magnolia Tree, Live Forever and Find You Here. A symbol of hope and support that spreads positivity and harmony with every note, Drew and Ellie invite you to share in their musical joy and warm the cockles this winter.

Seen Drew and Ellie Holcomb? Loved it? Hated it?

Sound good to you? Share this page on social media and let your friends know about Drew and Ellie Holcomb at Birchmere Music Hall.